If You Believe It, You Can Achieve It 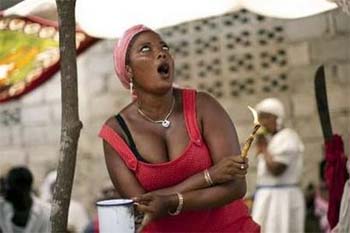 I came across this picture in a photo gallery, and this woman is said to be in a trance from practicing voodoo. Yup, you read that right. And needless to say, my first thought was – Lord Send Me Cash!

As I thought back, I remembered working with a guy who practiced the Voodoo religion. His story to me was that being the only “African American” in his department of very well paid HP IT employees, he encountered a lot of pressures and racism from upper management. So, whenever he wanted to get the boss man off his back he would place something in the freezer (I can’t recall what exactly it was) but within a day or so they left him alone.

At the time, I was going through similar problems on the job, so, I naturally found his story to be pretty hilarious. He emphasized the fact that his intentions were not to cause harm, but to cease the bullshit that caused him stress. However…. the thought of practicing voodoo is all around pretty scary – so for that reason alone, I kept a friendly distance.

The voodoo religion is believed to have started in Haiti in 1724 as a snake cult that worshiped many spirits pertaining to daily life experiences. Voodoo believers must invoke spells to pacify angry spirits, and although the idea may sound like a fast solution to a problem, and an easy way to aquire love, happiness, health and wealth – I personally rather just call upon God in time of need.