Katt Williams High On Drugs Speaks On Arrest In Oakland, CA Before Show

Katt Williams may have just killed his career. The troubled comedian is currently being written off by thousands of disappointed fans who paid good money to see him perform last night (Nov. 16) at the Oracle Arena in Oakland, CA. 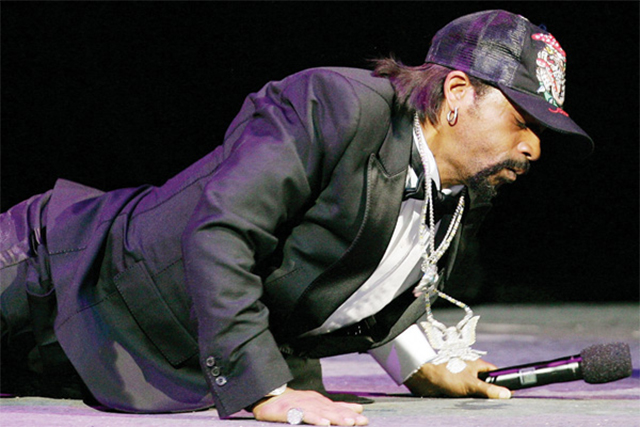 “I'm done with Katt Williams,” said one attendee in the crowd. “He don't never have to worry about me buying another ticket to his show, or nothing else for that matter. I want my damn money back.”

Things took off to a bad start with Williams not making an appearance on stage until close to 10:45 p.m., after the show began at 8 p.m. When he did come on, he wowed the crowd by exercising and dancing across the stage, performing several pushups and other acrobatic moves. After which, he disappeared and allowed a guest comedian to perform.

The show then went into recess for what seemed like an eternity.

While the packed arena was entertained by good music, and a special surprise performance by rapper Too Short and Richie Rich, Williams' lag to come out and do stand-up was questioned.

Was he backstage getting high? Was he too wasted to perform? Were Too Short and Richie Rich (who were originally in the crowd) called on to stall time? What was he doing?

When Williams stepped on stage to make his grand appearance, he did manage to make several people happy by throwing real $100 bills into the crowd. But, what happened next was he disappeared again (watch video below).

Williams had been arrested the previous day for allegedly striking an 18-year-old in the head with a bottle. He was detained by the Oakland Police Department for several hours before being released. After making his way back to the stage for the third time, dressed for cold weather with a long fur coat and winter cap, he was finally ready to talk about it. See what he had to say, as well as highlights of the rest of his very short performance, in the video below.

What was going on with Katt Williams is still a mystery. As you can see in the above videos his physical reactions were a bit off. His appearance was also not up-to-par, and worst of all, he didn't tell any jokes to make the audience laugh. So, quite naturally when the host said to give it up for Katt Williams, the entire arena booed him viciously. It was really a sad and shocking moment.

Katt Williams has been rumored to be battling a drug addiction for several years now. He seemed to be making a comeback with his latest show Kattpacalypse, which appeared on Showtime back in August; however, after tonight's show, and the one earlier this month in Denver, the question remains: Will he ever recover? Or even better, while on tour, will he survive his remaining shows?

UPDATED: It appears once the majority of the crowd left the arena believing the show was over, Katt Williams returned to the stage. Towards the end, rapper Too Short and Richie Rich confirmed Williams was high on dope and they couldn't cover it up.

“Hey check this out,” said Rich. “We got a lot of love for Katt. Obviously he underestimated the potency of this Bay Area cocaine, or whatever that ni**a was on, but we still respect this ni**a. It was a dope show…” (see videos below)