Kim Kardashian Insists that “Her Ass Is Real” 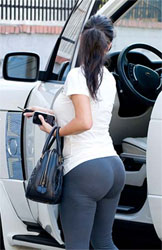 “I am really sick and tired of people being so mean and nasty and assume I am lying,” is what Kardashian wrote on her blog over the weekend.

For weeks fans and critics have reportedly accused the star of lying about her figure, some going as far as saying that the 'Dancing With The Stars' contestant should pick up some new pads.

“My measurements are 34, 26, 39. But remember I am 5’2” and ½ and everyone carries their weight in different places” Kardashian wrote on her blog just as the backlash and comments from 'non believers' reached an all time high.
source: msnbc

ON ANOTHER NOTE: A lady spends $5500 for a bigger butt and a smile, but instead cries from pain and misconfiguration.  Now, if this isn't the most embarrassing video on women wanting bigger butts, I'd like to see which one is.