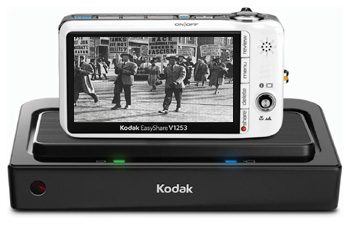 Yet another disappointing story where black people are being used by both large and small corporations who evidently feel they're just not worth as much as white people.

There use to be a time when it was considered a dream come true to land a good high paying job with a company as large and successful as Kodak, Chevron, etc., etc. — but in this day in age, particularly for black people — these companies only prove to be unhealthy and nothing more than unworthy of loyal employees.

It's never gonna change, even in the Obama era — black people will always be discriminated against in this society — maybe even moreso now than ever.  So it seems.

A lawsuit filed by black workers in 2004 alleging that Eastman Kodak Co. paid and promoted them less than their white co-workers has been settled.  Kodak has agreed to pay $21.4 million to end the battle.

The deal was given preliminary approval by a federal judge last month, according to court documents. It would have the Rochester-based company, while admitting no wrongdoing, pay amounts ranging from $1,000 to $75,000 to 3,021 past and current workers.

As part of the deal, Kodak promised to enhance its diversity training for supervisors and said it would hire an industrial psychologist and labor statistician to review its pay and promotion policies and recommend improvements.

The settlement comes a decade after Kodak paid $10 million in back wages and granted $3 million in annual raises to correct disparities in pay and promotions for black and female workers in some departments dating to 1996.

Plaintiffs in the 2004 lawsuit charged that the 1999 program did nothing to correct Kodak's discriminatory practices and accused the company of maintaining “a work environment that is hostile to its African American employees.”