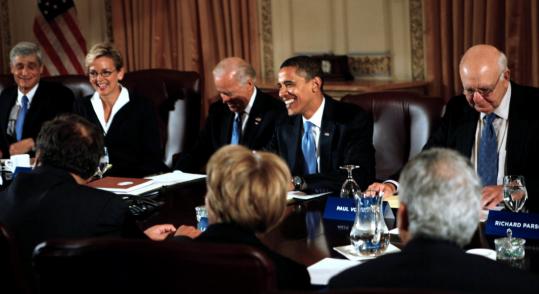 If you don't know by now, the Stimulus Package has finally been passed.

Highlights of the economic recovery plan drafted by House Democrats and President-elect Barack Obama's economic team are below. Additional debt costs would add $347 billion over 10 years. Many provisions expire in two years.

Education — $41 billion in grants to local school districts; $79 billion in state fiscal relief to prevent cuts in state aid; $21 billion for school modernization; $16 billion to boost the maximum Pell Grant by $500 to $5,350; $2 billion for Head Start.

Science and technology — $10 billion for science facilities; $6 billion to bring high-speed Internet access to rural and underserved areas; $1 billion for the 2010 Census.

— $500 per-worker, $1,000 per-couple tax cut for two years, costing about $145 billion. Workers could expect to see about $20 a week less withheld from their paychecks starting in June. Millions of Americans who don't make enough money to pay federal income taxes could file returns next year and receive checks.

— Greater access to the $1,000 per-child tax credit for the working poor in 2009 and 2010, at a cost of $18.3 billion. Under current law, workers must make at least $8,500 to receive the credit. The change eliminates the floor, meaning more workers who pay no federal income taxes could receive checks.

— Increase the earned-income tax credit — which provides money to the working poor — for families with at least three children, at a cost of $4.7 billion.

— Repeal a requirement that a $7,500 first-time homebuyer tax credit be paid back over time for homes purchased from Jan. 1 to July 1, unless the home is sold within three years, at a cost of $2.6 billion. The credit is phased out for couples making more than $150,000.

— Extend a provision allowing businesses buying equipment such as computers to speed up the depreciation of that equipment through 2009, at a cost of $5 billion.

— Provide an infusion of cash into money-losing companies by allowing them to claim tax credits on past profits dating back five years instead of two, at a cost of $15 billion.

— Repeal a Treasury provision that allowed firms that buy money-losing banks to use more of the losses as tax credits to offset the profits of the merged banks for tax purposes. The change would increase taxes on the merged banks by $7 billion over 10 years.

— Extend tax credits for renewable energy production, at a cost of $13 billion.

— Extend and increase tax credits to homeowners who make their homes more energy efficient, at a cost of $4.3 billion. Homeowners could receive tax credits of up to $1,500 for upgrading furnaces and hot water heaters and making other improvements through 2010.