'Lil White Girl Taught by Parents that All Blacks Should Die 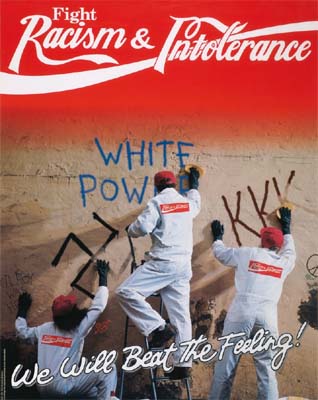 I'm pretty sick with the amount of “real racism” that I've read in the news these past couple of days — to the point I almost feel like backing away from mainstream media for a while. It's really just that disturbing — but honestly, there's no way around it — it's everywhere!

I'm actually wondering if I'll be gaining weight soon from all the stress I incur from reading this ridiculous shit. :-/

Yesterday, May 25, 2009 , a court was told that a young girl at the center of a child custody battle was taught by her parents that minorities should be killed and also was exposed to violent, racist videos.

The elementary school-aged child was familiar with Nazi phrases such as “Heil Hitler,” used racial epithets, and would talk calmly about how black people could be killed, a social worker testified.

She said “you would whip black people with a ball and chain and they would die,” testified the social worker, who cannot be identified under Manitoba law.

“She told me that what people don’t understand is that black people should die,” the social worker said. “She stated that everyone who is not white should die.

“She said that white children are not safe because of ‘niggers.’”

The child repeatedly used racial slurs about blacks, Asians, Arabs, and other minorities during a 45-minute conversation, the social worker testified, and believed any visible minority was a threat to white children.

The girl’s mother has denied teaching her children hatred. She said she and her ex-husband, from whom she is separated, “weren’t exactly teaching them anything” other than to be proud of being Caucasian.

The father sat in court simply biting his nails. WTF? He should be locked up, so they can kick his ass.