Live On The Set: Lisa Raye and Genuwine 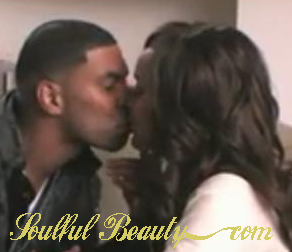 Some of the rumors that float around through the blogosphere are pretty kiddie to say the least.  Such as the one of Lisa Raye and Genuwine sitting in a tree…. K I S S I N G.  The rumors hit so hard about the two being romantically involved that somebody, whoever it was came forward on their behalf to state that the rumors of them kissing all night in a chinese restaraunt then later taking it to a room were NOT true.

Apparently, whoever spread the rumor knew something that nobody else did and ran to the border with it.

In Genuwines upcoming video “Last Chance” he DOES IN FACT share a kiss with Lisa Raye who is playing the role of his wife.  Nothing out of the ordinary in my opinion.  Actually I think the whole video is quite boring from what I'm seeing thus far.  Hopefully the finished product will be a little more something to grind to.

They do look cute together tho. Too bad he's married.