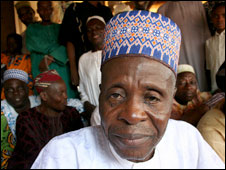 If you ever thought the gangsta story of Yusuf Bey (source 1 and 2) was something to drop your jaw about, Mr. Abubakar is here to add his own personal experience to the madness and make you really wonder just how in the WHAT?!? could they possibly mean that what they say is true.  It's TRUE.  OMG

Nigerian Mohammed Bello Abubakar, 84, has advised other men not to follow his example and marry 86 women.

The former teacher and Muslim preacher, who lives in Niger State with his wives and at least 170 children, says he is able to cope only with the help of God.

“A man with 10 wives would collapse and die, but my own power is given by Allah. That is why I have been able to control 86 of them,” he told the BBC.

He says his wives have sought him out because of his reputation as a healer.

“I don't go looking for them, they come to me. I will consider the fact that God has asked me to do it and I will just marry them.”

But such claims have alienated the Islamic authorities in Nigeria, who have branded his family a cult.

Most Muslim scholars agree that a man is allowed to have four wives, as long as he can treat them equally.

But Mr Bello Abubakar says there is no punishment stated in the Koran for having more than four wives.

“To my understanding the Koran does not place a limit and it is up to what your own power, your own endowment and ability allows,” he says.

As Mr Bello Abubakar emerged from his compound to speak to the BBC, his wives and children broke out into a praise song.

Most of his wives are less than a quarter of his age – and many are younger than some of his own children.

The wives the BBC spoke to say they met Mr Bello Abubakar when they went to him to seek help for various illnesses, which they say he cured.

“God told me it was time to be his wife. Praise be to God I am his wife now.”

Ganiat Mohammed Bello has been married to the man everyone calls “Baba” for 20 years.

When she was in secondary school her mother took her for a consultation with Mr Bello Abubakar and he proposed afterwards.

“I said I couldn't marry an older man, but he said it was directly an order from God,” she says.

She married another man but they divorced and she returned to Mr Bello Abubakar.

“I am now the happiest woman on earth. When you marry a man with 86 wives you know he knows how to look after them,” she said.

Mr Bello Abubakar and his wives do not work and he has no visible means of supporting such a large family.

He refuses to say how he makes enough money to pay for the huge cost of feeding and clothing so many people.

Other residents of Bida, the village where he lives in the northern Nigerian state, say they do not know how he supports the family.

Most of his wives live in a squalid, unfinished house in Bida; others live in his house in Lagos, Nigeria's commercial capital.

He refuses to allow any of his family or other devotees to take medicine and says he does not believe that malaria exists.

“As you sit here if you have any illness I can see it and just remove it,” he says.

But not everyone can be cured and one of his wives, Hafsat Bello Mohammed, says two of her children have died.

“They were sick and we told God and God said their time has come.”

She says that most of the wives see Mr Bello Abubakar as next in line from the Prophet Muhammad.

Indeed, he claims the Prophet Muhammad speaks to him personally and gives detailed descriptions of his experiences.

It is a serious claim for a Muslim to make.

“This is heresy, he is a heretic,” says Ustaz Abubakar Siddique, an imam of Abuja's Central Mosque.