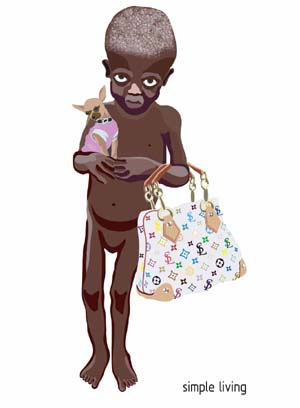 Apparently Louis Vuitton is suing Nadia Plesner, a designer/artist who is simply trying to raise awareness on the genocide Darfur, a more serious issue going on in the world that the media should be focused on besides Paris Hilton and the personal lives of other celebrities and their designer luxuries. Let’s bow our heads and pause a moment…

Nadia states on her website that, “My illustration Simple Living is an idea inspired by the medias constant cover of completely meaningless things. My thought was: Since doing nothing but wearing designer bags and small ugly dogs apparently is enough to get you on a magazine cover, maybe it is worth a try for people who actually deserves and needs attention.”

My first thoughts on the artwork is that this poor kid in Darfur definitely deserves the chance to own a dog and a pretty handbag. It’s awfully sad to look at with the thought that she may never be able to because of the state of emergency that she’s in. Nothing negative towards Louis Vuitton would have ever crossed my mind.

However, Louis Vuitton doesn’t see it the same way and has filed suit against Nadia, claiming damages of over $20,000 a day, each day the campaign continues.

There’s no doubt that luxury brands have teams of brand police within their marketing to ensure their products aren’t being misused, and have taken action by first sending a cease and desist letter to Nadia (read here)


In Nadia’s own defense, she claims her right to self-express (read here)

Wow, I sure hope that Louis Vuitton is only trying to help bring more awareness to the issue at hand by initiating a fight and crying brand jacking. It’s clear that the intention was not to harm them in any way, but rather support a worthy cause 100% by getting a message across. It’s a good one, I think. Not to mention the t-shirt is kinda cute.