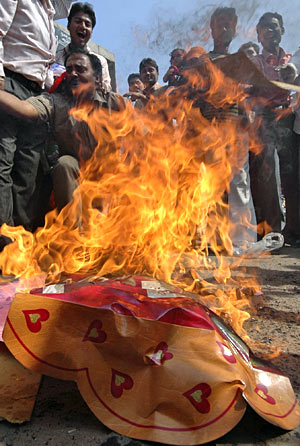 After reading so much about India (the problems they are facing) and the Indian culture (the things they believe in), it leads me to believe that is one place out of a few I probably would never be happy to visit.  Sad but True.

Police are on alert after Hindu radicals who earlier attacked women at a pub vow to round up any young couples celebrating the holiday, which they say is offensive to Indian culture.

A card, chocolate and roses, an affectionate evening with your sweetheart — what's not to like about Valentine's Day?

Plenty, if you're one of the extremist groups in India that see in Cupid's pointed arrow a lance aimed at the heart of Indian culture.

Fringe groups, most notably the Hindu extremist Shri Ram Sena, or Lord Ram's Army, have threatened to make their displeasure known by attacking couples who show affection in public and disrupting businesses that sell Valentine's Day gifts and cards.

Their condemnation of heart-shaped balloons, purple prose and fluffy teddy bears as Western pollution has been supported in years past by other hard-line Hindu and Muslim groups.

Shri Ram Sena vowed this year to march any couples found canoodling straight to the temple, forcing them to marry on the spot. When the legality of their heavy-handed idea was questioned, the group shifted, threatening to remand those who offended them to parents or sympathetic police.

It has also vowed to set up a help line on Valentine's Day for girls harassed by boys and warned women against wearing “noodle straps” or tight jeans.

“Westerners are trying to break up the Indian family system,” said Pramod Muthalik, the group's head, who was arrested briefly after his group attacked women at a Mangalore pub last month. “Giving flowers on the streets, showing affection in public, showering kisses in full public view is wrong. What is the difference between us and animals?”