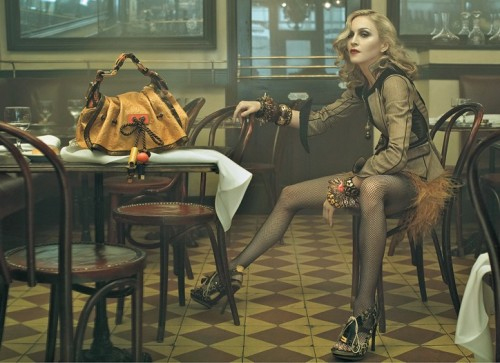 At 50 years old, Madonna is still doing it big and doing it extremely well.

WWD gives us the first look at Louis Vuitton’s new ad campaign featuring Madonna that everyone has been waiting for.

The ad campaign is a take on the Parisian theme of Marc Jacobs‘ Spring 2009 Louis Vuitton collection, with a setting in a smokey French bistro and the sepia-toned images evoking a Brassai atmosphere which results in six atmospheric pictures of Madonna shot by Steven Meisel that will be featured in magazines in February.

“The campaign marks the end of Vuitton’s six-year collaboration with photographers Mert Alas and Marcus Piggott, with the parting characterized as amicable, and another reunion for long-time collaborators Madonna and Meisel. Jacobs last worked with Meisel in his Perry Ellis days.”

When it came to choosing the new face, designer Marc Jacobs wouldn’t have it any other way. “I wanted the campaign to be very bold, very sensual and very atmospheric. To carry off all these references and all its sophistication, we needed the ultimate performer — and for me, that is Madonna,” says Jacobs.

For another sexy Madonna Louis Vuitton shot click the pictures link below.