Mariah Carey seems to really have had a hard time playing the role of an ugly social worker in the upcoming movie “Precious” she’s starring in. 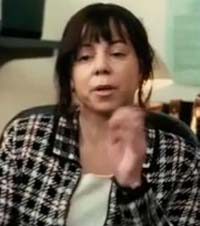 For starters, she claims the prosthetic nose she had to wear in the movie caused her to suffer a serious allergic reaction to the materials used to create it.

“It started to make me break out so we had to rip it off,” Carey said of her role as a plain-Jane social worker in the forthcoming film. “After that, I was all red and swollen. I have such sensitive skin that it started to eat away all my face. It was like, ‘I won’t be doing this.’

“But it did have an effect on my look in the film, unglamorous, not pretty at all.”

Mariah, 40, recently revealed she struggled so much with the unglamorous role she landed herself in trouble with the film’s director after he caught her trying to put on make-up.

“It was tough,” she said. “I am so used to the music world which is so different with the cameras, the lighting, the angles and this and that. At one point the director caught me trying to put blusher on and he said, ‘What are you doing? What are you doing?’ He was not going for it.”

By the time the shoot was over, Carey said the experience of going without makeup left her more relaxed about her looks.

“I feel better about myself when I am just normal at my house walking past the mirror without make-up on now,” she said. “I’m like, ‘Well, I’ve looked worse!'”

Mariah was also reported to having a tough time with celebrity hairstylist Ricardo Rojas during her trip to Cannes Film Festival. Following the trip, she decided not to use Rojas again after he left her on the day of the premiere of her new film Precious without informing her.

“He came highly recommended and he travelled with her for a few weeks. But at Cannes it got very stressful,” the New York Post quoted a source as saying.

“At one point, Mariah, who went to beauty school, was unhappy with her hair and was showing him how she liked it. It seemed to have not gone over too well and he didn’t show up the morning of her press conference and premiere of her new film Precious,” the source added.