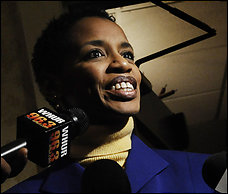 Edwards beat Republican Peter James in the race to serve the remainder of former U.S. Rep. Albert Wynn's term in Maryland's 4th District. Wynn left office May 31 to take a lobbying job after losing to Edwards in February's Democratic primary by 22 percentage points.

Edwards, 49, will hold the seat for the rest of the year. James also won his party's primary in February, meaning he and Edwards will face each other again in November's general election.

Once she is sworn in, Democrats will have 236 seats in the House to Republicans' 199.

The victory also gives Edwards a chance to establish some seniority if she is elected to a full term. A half-year spent in the House could give her a slight edge over other incoming freshmen, such as better committee assignments.

Edwards most recently led the nonprofit Arca Foundation. Her win in February was her second try at the seat after losing to Wynn in 2006 by a slim margin.

With about 25 percent of precincts reporting Tuesday night, Edwards had 93 percent of the vote, or 2,853 votes, to James' 6 percent, or 189. Voter turnout appeared to be low.

Buoyed by support from powerful interest groups and unions, she capitalized on voter distaste for Wynn's positions and votes on issues like the war in Iraq and the housing crisis.

James, 52, of Germantown, focused much of his campaign on trying to alert voters to what he says are fundamental flaws in the nation's banking system. He describes himself as a Republican in the vein of Ron Paul, the libertarian-minded Republican presidential candidate.

Maryland's first black elected congressman was Parren Mitchell, who served from 1971 to 1987 in the 7th District, according to Jennifer Hafner, the deputy director of research at the Maryland State Archives.