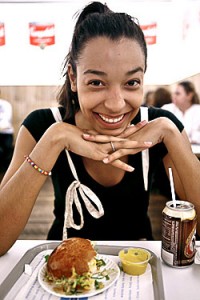 I’ve thought about modeling at one time. Back in my younger days I’ve even been approached by people who thought I would be a good look. I’m not sure if they were serious and meant for the runway, or a centerfold, but either way, it wasn’t a dream I wanted to pursue.

To me being a model definitely is not what it’s all cracked up to be, especially a runway model. Sure everyone loves designer clothes, but the more I learn about the modeling industry and the lifestyles these girls live, the more it sickens me. If I ever had to choose between my natural figure and being a size 0, exposing rib bones and being sick just to fit the profile, you would never see me on the catwalk.

Tatiana Stewart’s is 6’2″ and wears a size 4. She attracts fashion-modeling scouts on the street, but once she appears at auditions, they tell her that if she wants to pursue a career on fashion’s runways, she must lose weight. “I can’t imagine her being as beautiful as she is if she’s emaciated,” says Stewart’s mother.

Her sentiments underscore the fact that, despite the starvation deaths of several models and the fashion industry’s pledge to protect the health of the young people who promote its clothes, skin and bones are still the ideal, as we head into a round of fashion-week shows next month. Parents of aspiring models wind up torn between hopes for their children’s success and concerns for their health.

This spring in Soho, Tatiana was spotted by a scout for “America’s Next Top Model.” On the given day, she was escorted past a winding line of hopefuls and into a room with roughly 50 girls. “They lined us up against the wall and asked our name, age, measurements, height and weight,” she says. “Then they told us to lift our shirts up just below the — the chest — and they filmed us to see our body type. … That’s when I was cut.” She says she wasn’t given an explanation. CW Network, which airs the show, says it doesn’t have weight guidelines for the show but couldn’t comment on the specifics of her rejection.

Tatiana says, “I always thought I was thin”. “Girls here I know are 5’10 and size 0, and they want them to lose weight for Fashion Week. I don’t think anybody’s body is naturally like that.”

In one weight-loss attempt, Tatiana tried taking laxatives for two days until her mother found out. “She said they want her to be ‘heroin chic’ — she needs to have sunken cheeks,” says Ms. Symonds-Powell, her neck reddening with emotion.

Instead, Tatiana has gained a few pounds. She recently began dance classes and is dieting on cabbage soup and fruit, on directions from her mother. source