More on ‘Precious’ and The True Standards of Beauty

Since the subject of Hollywood and societies standards of beauty seems to be a hot topic, let’s look at Lee Daniel’s film “Precious,” and what others are saying.

While visiting Jezebel the other day, blogger Latoya Peterson was a little annoyed by a review of the film done by New York Magazine. After reading the review, I can’t much blame her. The choice of words David Edelstein chose to use to describe newcomer Gabourey Sidibe’s appearance in the film were more than harsh. For the most part, he suggested that her image onscreen is jarring to the point of being transgressive.

“Her head is a balloon on the body of a zeppelin, her cheeks so inflated they squash her eyes into slits. Her expression is either surly or unreadable. Even with her voice-over narration, you’re meant to stare at her ebony face and see nothing.”

Director, Lee Daniels himself said that he was on a cloud with the release of the film and just waiting for someone to pop it. Well, I would say Edelstein has poked pretty hard trying to burst the clouded bubble.

In response to David Edelstein’s attack by Jezebel readers and others, he had this to say:
“When a filmmaker in or out of Hollywood makes a movie about a victimized African-American girl, you can expect him or her to cast an actress who is thin and light-skinned with big round eyes to make everyone (black and white) want to identify with her. Lee Daniels, in filming Precious, has gone to the opposite extreme. He presents a heroine, Precious (Gabourey Sidibe), who is, in the context of mainstream American culture, on the bottom rung status-wise. That is not my prejudice; it is reflected in every aspect of our society, from job opportunities to magazine covers. (Outside of Oprah, who has spent millions to lose and keep her weight off, it’s hard to think of another overweight African-American cover girl (until now, anyway.) It is unjust, it is mean, it is destructive, it is inhuman, but it is true. It’s also the whole point of the movie (even more so than the novel). Here is an obese, black-skinned (as opposed to latte-colored), pregnant, illiterate, poor girl: She has everything against her. And Daniels, like Sapphire, continues to pile on the abuses. She is sexually assaulted by both parents. She is beaten into unconsciousness with a cast-iron pan. She is kicked in the face giving birth. She is expelled from school for being pregnant (not even her fault) but the result of her father’s rape. She has AIDS.” 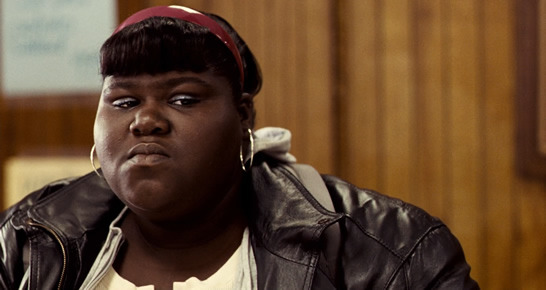 Although, Edelstein felt by responding it would clear him from prejudice, to me, he only made matters worse by generalizing the ideal standard of beauty into a thin and light-skinned category. The sad part, it may be true thin and light-skinned is what people are conditioned to believe is more pretty, but what’s not true is that everyone (black and white) wants to identify with that generalization. It’s definitely not true that everyone relates to only one category of so called beauty.

During Lee Daniels interview with newsday.com he states:

“The key to Precious is that she learns to love herself. And it’s a hard thing to do. You’re conditioned to not love yourself, to think yourself unworthy. I’m conditioned right now to think the cloud is going to pop. Precious makes you look at that in a hard way.”

Although size, weight and skin tone are all elements in the story, Sidibe says in real life she’s not ‘Precious,’ she didn’t need to absorb any lessons in self-worth.

“I do have pride and I do love myself,” she said, “but I don’t love myself because I’m a big woman. If I were to change, I’d continue to love myself. I think it’s harder when you look differently, and not just being big: If you’re darker, or your hair’s different, there are so many ways the outside world pushes you to not love yourself.”

For Sapphire, the author of the book ‘Push,’ which the film is based, the story is real. When she spoke on it, she says when she sat down to write the book she believed in the story.

The film ‘Precious‘ is scheduled to hit the big screen nationwide Nov. 6 and is currently in talks of receiving an Oscar. It should be interesting to see how that goes.

For pictures at the Hollywood premiere of Precious, click below.