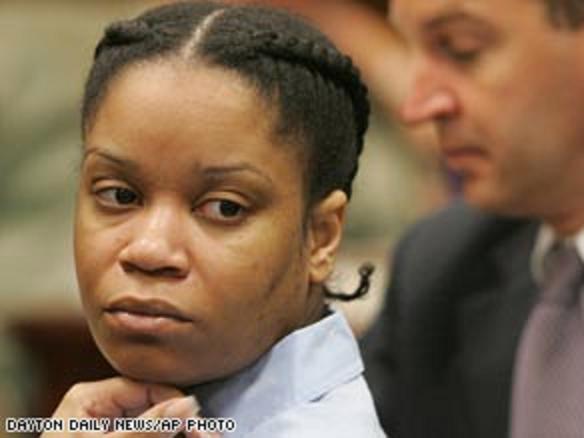 DAYTON, Ohio (AP) — A mother was convicted Friday of killing her month-old daughter by burning her in a microwave oven, with jurors rejecting a defense attorney's claims there was evidence that someone else was responsible.

China Arnold, 28, showed no reaction when the jury's verdict was announced and then lowered her head, looking down at the defense table.

Relatives in the courtroom cried and covered their faces with their hands.

She was found guilty of aggravated murder and faces the death penalty when sentenced.

Arnold was accused of killing daughter Paris Talley in 2005. A judge declared a mistrial in February, and the retrial began August 18.

Prosecutors said Arnold intentionally put her baby in the microwave oven and cooked the child to death after a fight with her boyfriend.

Arnolds' cell mate testified that Arnold confessed to putting the baby in the microwave and turned it on because she was worried her boyfriend would leave her if he found out the child wasn't his.

The baby's DNA was found inside the microwave in Arnold's apartment, prosecutors said.

Defense attorney Jon Paul Rion told the there was evidence that someone else was responsible.

He cited testimony from an 8-year-old boy who said he saw another boy walk into the kitchen of a nearby apartment with the baby, heard the microwave go on, and then later saw the burned baby in the microwave.

Judge John Kessler declared a mistrial February 11 after he privately heard testimony from the juvenile.

In rebuttal, however, the 8-year-old's mother testified Wednesday that they lived some distance away and they were not at Arnold's apartment complex when the baby died.

Her former live-in boyfriend also testified that he was certain the boy was not at the location.