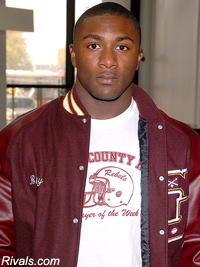 A George County High School football star died of an apparent self-inflicted gunshot wound early Monday after being pulled over by a sheriff's deputy, authorities said.

It's not clear why 17-year-old Billey Joe Johnson was stopped in Lucedale, but authorities say the junior tailback shot himself with a shotgun after the deputy walked back to the patrol car to run a license check.

“The deputy was sitting in his patrol vehicle … when he heard a gunshot and saw the victim laying on the ground by the driver's side door of the vehicle that Johnson was driving. A shotgun was lying on the victim,” according to a statement from the George County Sheriff's Department.

Authorities would not immediately say whether they believed the shooting was a suicide or an accident.

School officials said they were stunned by the news. Assistant coach Darwin Nelson, who went to the scene to help identify the body, told The Associated Press that Johnson was one of the most promising athletes he's seen on the football field.

“We're just in shock,” Nelson said. “To say that he had a world of potential would be one of the biggest understatements of the century. I just can't explain this.”