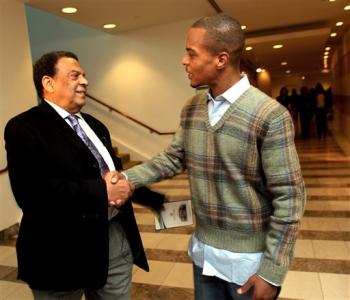 Former United Nations ambassador Andrew Young, an advocate for peace around the world, is now taking aim at gun violence in the U.S. through a new TV documentary that focuses on the rapper T.I. — a young man making amends for federal firearms offenses.

Young premiered the hour-long film, “Walking With Guns,” on Sunday in Atlanta. It includes extensive footage of the Grammy-winning artist visiting a rehabilitation hospital in New York to meet patients paralyzed by gang violence. The film also shows T.I. and Young telling young people how to avoid violence, and follows a former gang member who is now a social activist.

The film, part a series called “Andrew Young Presents,” is expected to begin airing Nov. 2 on TV stations around the country.

“Violence would still be around without guns,” T.I. said to over 400 attendees during a question-and-answer session after the screening. “But there would be an increased value of life.”

The 76-year-old Young — a veteran civil rights activist who went on to become a Georgia congressman, President Carter's ambassador to the U.N. and Atlanta's mayor — began filming this year shortly after he began to mentor T.I., 28. The rapper, whose real name is Clifford Harris, pleaded guilty to several charges last March and was sentenced to prison time, community service and supervised home detention. His community service includes warning young people about the pitfalls of guns, gangs and drugs.

“Some of my colleagues are disappointed with me taking this young man in,” Young said of T.I. “But sometimes us old folks have to shut up and listen to the young folks to understand where they are coming from.”

For sneak peaks of this documentary check out: http://andrewyoungpresents.com/tv_4.html