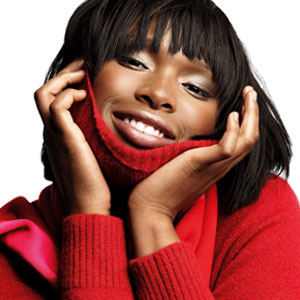 Still, the Gap has just launched its new holiday ad campaign, which features a cheery photo of Hudson smiling and wearing a bright red sweater.

While the timing may seem inappropriate, a rep for the clothing-store giant assures us that Hudson has given her blessing to use the image.

Hudson was given the option to back out, according to Gap spokesperson Olive Doyne. “She said she wanted to be a part of it and that we should move forward,” Doyne says.

Hudson was photographed for the ad by Michael Thompson back in July in New York City.

The ad, which includes the tagline “Shine Your Own Star,” can be seen in magazines and newspapers and on billboards in New York and Los Angeles.

Jennifer thanked all her fans via a new MySpace blog: “My sister and I take great comfort and strength from your love and concern.” Jennifer alongside fiance/pro wrestler David Ortega and her close family members have been in mourning at the Trump International Hotel & Tower in Chicago.