I guess the black beauty movement from the 60's are still in full effect denouncing anything that attempts to portray an inaccurate image of black women and men. 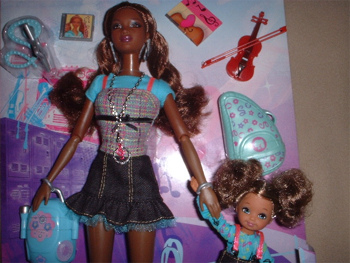 In this case, the new S.I.S. black barbie doll line “So In Style” introduced by Mattel which feature fuller lips, a wider nose, more pronounced cheek bones and versatile hair texture is apparently raising some concern.

According to MSNBC, critics are saying the long straight hair does not address the beauty issues that many black girls struggle with. In the black community, long, straight hair is often considered more beautiful than short kinky hair.

“Why are we always pushing this standard of long hair on our girls?” asked Gail Parrish, 60, a playwright in Alexandria, Va., and a mother of four grown children. “Why couldn't one of the dolls have a little short afro, or shorter braids or something?”

There is a So In Style hairstyling set so girls can curl, straighten and style their dolls' hair over and over. (It costs $24.99, more than a pair of dolls at $19.99.)

That is troubling to Sheri Parks, an associate professor of American Studies at the University of Maryland in College Park, because it actively involves girls in the process of straightening hair. She worries that it reinforces the message that there is something wrong with natural hair.

Aside from the hair, some black women are concerned about the dolls' thin frames. Barbie, which celebrated her 50th birthday in March, has for years come under fire for promoting an unrealistic body image, with her long legs, tiny waist and large breasts.

While white girls also deal with body-image issues, Kumea Shorter-Gooden, co-author of “Shifting: The Double Lives of Black Women in America,” believes Barbie has a more negative impact on black girls. They are already struggling with messages that “black skin isn't pretty and our hair is too kinky and short,” she said.