No Ugly People Allowed Here but Super Fat May Be OK? 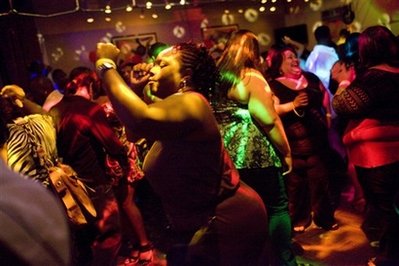 Quite a bit going on these days with club clicks.

I recently read where a new dating site has launched for beautiful people only (that's right) no ugly people allowed.  Members are chosen to participate by the number of qualified votes they recieve from other participating members seeking to meet beautiful people.  The online service even goes so far as to advertise a ban on ugliness. The site says that only 20% of those who apply are approved for membership.

Although I definitely like beautiful people, I can't say I would want to be a part of the beautiful people click because it all sounds so very stuck up.  Being beautiful is one thing, but beauty with a bad attitude and messed up personality makes a person very ugly to me.

Then we also have the super size it “Club Bounce” click; a new night club for fat people only (very fat people).  WTH?

Seriously how humiliating is that?  People are talking all this talk about Tyler Perry and his so called coonery not being the truth and this and that and whatever, but to me “Club Bounce” for fat people takes bafoonery to a level that I don't believe any of Perry's movies could ever or would ever reach.

As the media describes Club Bounce, people are bouncing onto the dance floor in a big, big way (lmaoooooo). These are big, big people, all dressed to the nines and many tipping the scales at 250, maybe 300 pounds.

That's because this expansive nightclub a couple blocks from the Pacific Ocean, with its flashing lights, friendly atmosphere and wall-rattling hip-hop sounds, caters specifically to fat people.

That's right, fat people. Not just any fat people, either, but fat people who are proud to call themselves fat people. People who joke that they are part of the new Fat is Phat movement.

“Self-conscious? No! Not at all,” laughs Monique Lopez, a curvaceous woman of 23 as she arrives in a tight, black dress and heels. “I was like, 'I'm going to Club Bounce tonight. I'm going to wear my shortest skirt.'” (Which she did.)

The movement for equal rights for plus-sized people is nothing new of course. The National Association to Advance Fat Acceptance, with chapters around the country, was founded 40 years ago. A nonprofit group, it advocates that everyone be treated equally regardless of size, arguing that we don't live in a one-size-fits-all world.

But what has been slower coming, fat advocates say, are places like Club Bounce, where people who might have some trouble getting past the velvet ropes at other night spots because of their size are made to feel like they fit right in.