Octavia Spencer Before and After at The 2012 Golden Globe Awards

Actress Octavia Spencer was overwhelmed with joy at the 2012 Golden Glob Awards (Jan. 15) from her win for Best Performance by an Actress in a Supporting Role in a Motion Picture for her role in “The Help.”

Donning a simplistic gown by designer Tadashi Shoji, paired with Christian Louboutin open toe platforms on the red carpet, Spencer shared her excitement for her first time at the Golden Globes. When dishing on how she beat out her competition (Queen Latifah, Monique, and Jennifer Hudson) for her role in “The Help,” she says: “I think what I had that they didn’t have was a direct line to Tate Taylor and Bresson Green.” 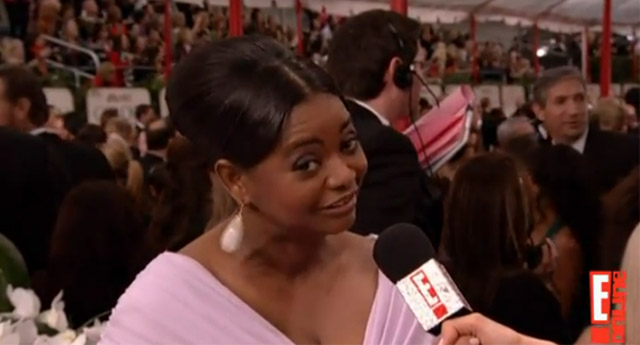 Excited for her win, Spencer says look at me now… “Last year nobody knew my name. This year, I got nominated.” She plans to do a work out with the weight from her trophy, which she says is made up of “some really delicious frosting.” Who mad?