A jury convicted O. J. Simpson of armed robbery, kidnapping and all 10 other counts stemming from a confrontation last year in a Las Vegas hotel room.

O.J. Simpson, left, hugged his friend Thomas Scotto after he was found guilty at his trial in Las Vegas. His sister Carmelita Durio is at right. 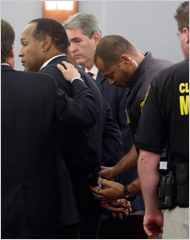 O.J. Simpson was handcuffed after receiving a guilty verdict in Las Vegas.

The verdict, which was read late Friday after 13 hours of deliberations, came 13 years to the day after Mr. Simpson was acquitted in the highly publicized murders of his former wife, Nicole Brown Simpson, and her friend, Ronald L. Goldman.

Mr. Simpson gave a heavy sigh as the verdict was announced but showed little emotion as officers led him handcuffed from the courtroom. Mr. Simpson’s sister, Carmelita Durio, broke into sobs as he was led away and later fainted.

Mr. Simpson’s lawyer said the conviction would be appealed. Sentencing is scheduled for Dec. 5, and Mr. Simpson, 61, and his co-defendant, Clarence Stewart, 54, could spend the rest of their lives in prison. Kidnapping is punishable by five years to life, and the armed robbery conviction requires a mandatory sentence of at least two years and up to 30 years. The presence of a weapon at the scene adds years to the minimum sentences for 9 of the 12 charges, which include conspiracy to commit robbery, burglary, assault and coercion.

Defense lawyers said they worried from the start about what one described as the “spillover effect” from Mr. Simpson’s controversial acquittal in 1995.

“I don’t like to use the word payback,” Mr. Galanter said. “I can tell you from the beginning my biggest concern was whether or not the jury would be able to separate their very strong feelings about Mr. Simpson and judge him fairly and honestly.”