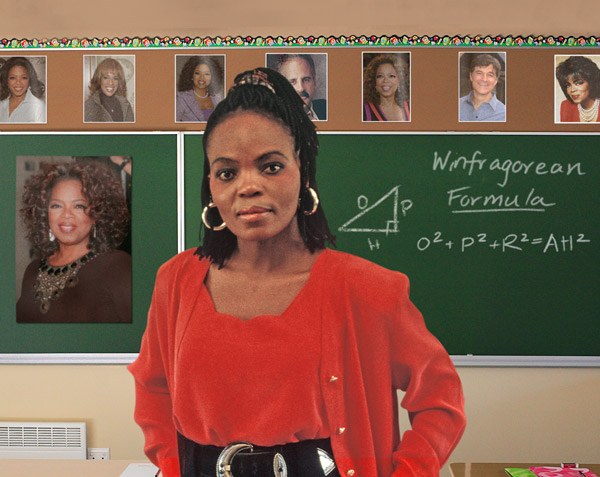 Faced with a $75,000 deficit in its operational budget, the Oprah Winfrey Leadership Academy for Girls announced this week that it would be forced to cut a number of core Oprah courses from its enriched Oprah curriculum.

According to school officials, a total of eight classes will be dropped or scaled back starting this fall, including Introduction to Oprahmatics, 20th-Century Oprah History, and the language arts elective American Winfrey Literature.

“We had to make some tough choices, and in the end, courses like Oprahnomics and World Winfrography were simply too expensive to keep around,” announced principal Desiree Verdan, speaking before reporters in the school's Harpo Arts Auditorium. “Sadly, with the high cost of Oprah-based education these days, eliminating these programs is our only recourse.”

Added Verdan, “This is definitely not one of our Favorite Things.”

Students at the school use outdated textbooks and are still sharing Oprah Book Club novels from 2002.

“It's devastating,” vice principal Lerato Morris said. “Our music department no longer has enough instruments for students to play the show's theme song, we've been forced to make do with the same old copies of O Magazine for months, and just yesterday one of our third-graders asked me who Gayle was.”

Extracurricular courses such as Advanced Oprah Studies, Oprah Latin, and the independent study program Laughing at Everything John Travolta Has to Say have also had their class sizes reduced by half.

Teachers aren't the only ones at the private school feeling distressed. A number of students, many of whom walk miles every day just to learn how much weight the talk show host lost on her new diet, also expressed concern over the changes.