According to the Guinness World Records website, they were deeply concerned to hear about a car accident involving Lee Redmond, who holds the record for the longest fingernail’s at a combined length of 8.65 m (28 ft 4.5 in). 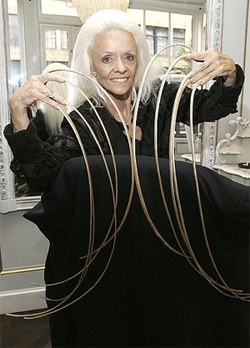 Lee, a 66-year-old great-grandmother and former hairstylist from Salt Lake City, Utah, USA, sustained serious but non-life-threatening injuries in the accident on Tuesday February 10, 2009, when the vehicle she was riding in was involved in a collision. Sadly, her record-breaking nails were damaged beyond repair in the crash.

“As a long-term friend of Guinness World Records, Lee is a fantastic ambassador for the company, said Editor in Chief Craig Glenday, “appearing on our TV shows around the world and promoting to school children that it’s okay to be different. Losing her nails in such a terrible accident has shocked everyone here at Guinness World Records they were such a fundamental part of her life and unique character. We all hope that she makes a speedy recovery.”

The last time Redmond cut her nails was in 1979, when Jimmy Carter was in the White House and Billy Joel was winning Grammy’s for his song “Just the Way You Are.”

Redmond managed to do all the everyday things, including driving a car and using a cell phone, she just did it all with a total of 27 feet of stiff protein dangling from her hands.

Redmond started growing her nails on a whim. By the time they had reached 3.5 inches she caught the eye of a local Utah TV producer.

To check out a variety of photos of Lee Redmond’s nails see here.

In the meanwhile we still have Louise Hollis holding the record for the world’s longest toenails. I’m sure most would consider it ghetto, but hey it’s a fact of life that nails actually grow that long and for whatever reason some people happen to like it. The first question most people want answered is “how do people with nails that length wipe their ass?” I’d like to know as well. I’d also like to know what’s the typical routine for keeping the nails healthy? I’ve always heard that nails after a certain length can’t be cut because they have grown veins. However, I haven’t found any truth in that anywhere.

In 1991, the combined length of Californian Louise Hollis’ 10 toenails was 2 m 21 cm (87 in) – so each is approximately 15.25 cm (6 in) long. She started growing her toenails after leaving them long to make her feet look pretty in sandals for the summer. The mother of 12 and grandmother of 21, Louise just couldn’t bear to file them down. She enjoys the attention the nails bring her while out and about in her hometown of Compton, California. She spends two days a week maintaining the nails, with the whole family lending a hand to help paint and file her collection. She is single after a frustrated husband gave her the ultimatum, “It’s me or the nails!” Her reply, “I’ve had you for 21 years but the nails are new.”

Long nails, whether they be fingernails or toenails, may harbor harmful bacteria under the nail bed. As nails grow, bacteria multiply under their surface. Keep this is mind if you decide to test out long toenails. The nail bed and the free edge of your toenail should be cleansed every few days to remove any dirt or debris hidden under the nail.

Harmful bacteria found under the nail bed can cause many health conditions. Nail fungus is a common disorder normally found on the toenails. In addition to being unsightly and unpleasant to smell, nail fungus may cause permanent and painful distortions of the nail bed.

Staphylococcus infections are yet another health risk related to fingernail and toenail grooming. It is crucial that any nail implements are sanitized properly in between use to prevent the spread of the Staph virus. If you frequent nail salons for your monthly pedicure, it may be wise to purchase your own set of grooming implements and bring them along to ensure your visit is safe and free of this dangerous, sometimes fatal virus transmission.

Lastly, ingrown toenails are an extremely common, painful condition resulting from the nail growing outside the corners of its natural nail bed. Ingrown toenails are common when nails are kept at a mid to long length and then squeezed into closed toe shoes and heels. To prevent ingrown toenails, wear shoes that fit properly. If that means ditching the pointed toe heels, then do it. Podiatrists also advise that toenails be cut straight across rather than shaped to avoid abnormal nail growth into the surrounding tissue.