Are you tired of shaving away unwanted hair? Is the luxury of laser treatments a little over your budget?

The first products to be pitched for consumer use are for long-lasting removal of unwanted hair, one of the most popular cosmetic services, which typically costs thousands of dollars in spas and dermatology offices. The challenge for manufacturers has been to develop small, affordable devices that are powerful enough to be effective, but safe enough to be used by consumers. 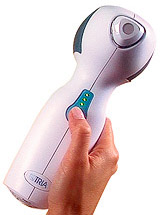 A device called Tria, which is being rolled out next month for the low low price of $995, is the first personal cosmetic laser to be sold in the U.S. The device, made by closely held SpectraGenics Inc. of Pleasanton, Calif., uses the same diode-laser technology that became the gold standard in professional hair removal more than a decade ago. SpectraGenics has been selling a version of the Tria, called i-Epi, in Japan since 2005.

A rival device, called Silk’n, will be launched at the American Society for Laser Medicine and Surgery meeting in Kissimmee, Fla., this week. Priced at $800, it incorporates a different technology, known as pulsed light, that is also found in professional systems. An Israeli company called Home Skinovations Ltd. is behind the device.

Tria and Silk’n have their limitations. They are slower than professional treatments, so they work best in small areas like lower legs, underarms and bikini lines rather than big areas like hairy men’s backs.

The Food and Drug Administration hasn’t cleared them for use on the face, though consumers could end up using the devices there. Also, African-Americans and other dark-skinned people can’t use them because of a risk of burns. Lasers and light-based technologies work by targeting pigment in the hair and can mistake dark or tanned skin for the enemy.

However, for those that dare to take chances, Tria’s maker developed a skin-color safety sensor that helped allay FDA concerns. A small, detachable tester is placed on the skin — it flashes a green light if the skin is light enough to be treated safely; a red light if it isn’t. To unlock the laser and start operation, the sensor, flashing green, must be waved over the hand piece. The only question I have is, “Will you have to purchase the device first, then worry weather or not you’re able to use it safely with your skin complexion?” That sounds like stress.

Tria will be sold, starting in late summer, at Bergdorf Goodman in New York and Studio at Fred Segal in Santa Monica, Calif. It will also be available at Bliss and Remèdespas, located inside Starwood Hotels & Resorts Worldwide’s W Hotels and St. Regis Hotels & Resorts. In May, several dozen dermatologists and plastic surgeons are expected to start selling the lasers in their offices.

The Silk’n’s FDA clearance requires it to be sold to physicians, who in turn may sell it to consumers. That’s because the FDA denied the manufacturer’s application for over-the-counter sale, fearing the device might be used on dark skin.

Both devices will compete against another new product, called nono no!no! no!no!

, which sells for $250 at Sephora stores and on the home shopping network Web site, hsn.com. More like an upscale shaver, it employs an electric heating technology that didn’t require regulatory approval, but can be used on all skin types. “It works well on the legs, but not so well in the bikini area,” says James Spencer, a St. Petersburg, Fla., dermatologist who tested the device, sold by closely held Radiancy Inc. of Orangeburg, N.Y. Some users have complained about the odor of burning hair, but Dr. Spencer says this isn’t a big problem.