PREACHING: The Choice of Life After Strong Hand Pimping 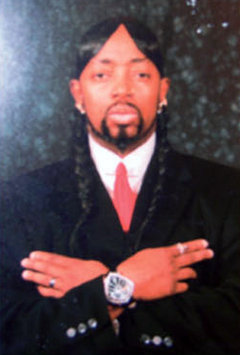 A story that sounds all so familiar; famous pimps throwing in their crowns to become preachers (i.e. Arch Bishop Magic Don Juan, Pastor Andre Taylor a.k.a Gorgeous Dre…) just to name two. Now, the latest to add to the roster is Jersey City's Allen “Prince” Brown.

Brown, 48, was sentenced to 18 years in prison on May 19 after pleading guilty to human trafficking and running a prostitution ring. Since his incarceration he's had time to keep himself groomed creating some amazing hairstyles, and really contemplate on changing his life around.

Yup, upon his return, he says he has plans to become “a man of the cloth.”

“I think I could handle the congregation pretty swell,” Brown said. “I am a leader. I have never been a follower…Yeah, it will be a fun parish. Put that down, become a man of God,” he told nj.com.

Brown, also said the only reason he pleaded guilty in his case was because authorities threatened to lock up his 73-year-old mother.

“She is a church-going woman,” Brown said about his mother. “She is retired from a telephone company. She has worked her whole life.”

“I feel terrible, and now I don't even know if I can see her alive.”

Not only does Brown plan on becoming a preacher when he comes home, he's also currently working on his autobiography which will go a little something like this:

“It started in the 8th grade, and continued through high school. Then the day came, I struck it big in NYC. She took me to 42nd Street, took her clothes off and was in a G-string and went to work as a prostitute. I was a young kid and was doing roller-skating shows at the Roxy and she asked me to be her pimp. She then handed me like $500. That's when I knew I had found my true calling: 'catching girls.'”

The full story when you continue 😉 …