RECESSION: The Good, Bad and the Ugly in The Beauty Salons 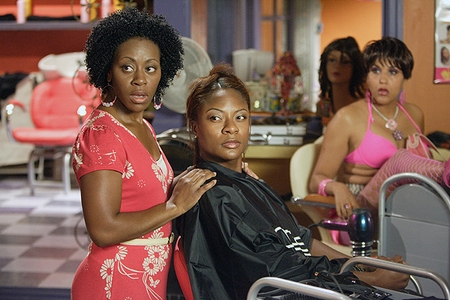 The beauty industry is proving to be both good and bad during the recession.

The good is that the industry is said to be holding up well financially.

The bad is that the industry is being financially held up at gun point by the ugly.

In less than 30 days, numerous reports have come out regarding robberies at local beauty salons across the country.  8 of them are listed below:

In Houston, the search is on for three men who robbed the Vega Beauty Shop. Authorities say the suspects walked into the store and asked one of the two employees working how many more people were waiting for haircuts. All three then sat down in the waiting area.

A short time later, two of the males walked behind the counter with guns and ordered the two employees and the two customers to get on the ground. The third suspect pulled out a roll of duct tape and taped up all four victims. The suspects stole personal items from all of the victims and cash from the salon. read more

Lupe's Salon in Memphis caters to the Hispanic community. So when three African American women came in asking about services, stylists at Lupe's Hair Salon became suspicious. Turns out they were right to be suspicious. The employees ended up chasing the woman who got away with thousands of dollars. read more

A man accused of robbing a hair salon in Reading is also charged with robbing an adult book store in Muhlenberg Township, Berks County. Police say Adam Degler robbed the store at knife-point on Thursday. He was then arrested Friday, just moments after he allegedly robbed Salon Mystique, also at knife point.  read more

In Anderson, a man went  inside a beauty shop first to retrieve his wife. Once his wife was outside the business, him and three other men, wearing masks and armed proceeded to rob the bank beauty salon.

The men announced the holdup, ordered customers to the ground at gunpoint and then robbed them of cell phones and purses. read more

In Rosemead, two masked men used a handgun to rob a beauty salon and several female patrons.  They managed to get away with money from the cash register as well as money and a cell phone from several women at the salon. read more

In Staten Island, investigators say two men are responsible for breaking into a nail salon in New Dorp Plaza and two restaurants on New Dorp Lane.

Police say the suspects broke in through a rear door or side window and stole money, a laptop, and liquor. read more

In San Antonio, police are looking for two gunmen who held up a salon on the northwest side Saturday afternoon.

Police said two men with guns walked into the salon and demanded cash. They got about $200 before running out.They said they don't have very good descriptions of the gunmen to go on. No one was hurt, but the robbers were still at-large. read more

In Oakland Park, Police said a woman went into a salon and asked the owner about a pedicure. As she spoke with the owner, the woman reached into her beige purse, pulled out a handgun, and demanded cash. The owner told the woman that since the store had just opened there was no money in the register.  The woman then fled and was still at large. read more

As you can see the list is long — and goes on and on…. It doesn't look like now is the time to sleep on the fact that America is broke and so are the people in it.  The desperate and unemployed are doing just about anything and everything they feel they have to — to survive.