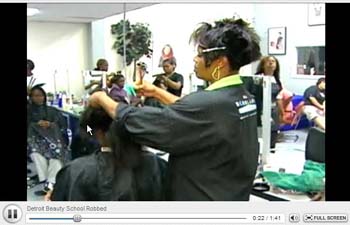 Thousands of dollars in hair extensions, hair care products, blow-dryers and other items meant to pamper and boost the confidence of homeless women were stolen Tuesday from a west-side beauty school — just hours before the school hosted its annual “Hair for the Homeless” event.

Despite the disappointing occurance, the show still went on thanks to dedicated school employees.

When employees of the school reported for work Tuesday morning, they found that someone had used a crowbar to pry open the rear door.  All of the products that had been donated for Tuesday's event had been stolen, along with 13 computers used by the school's 100 cosmetology students to study, and an office computer used by staff.

“We ran around like crazy and got people to donate items so we could make the event happen,” school president Lakia Hairston said.

“We planned for this event all year, and we weren't going to let whoever did this ruin our event.”

The school, in partnership with New Clientele Magazine, proudly held its third annual “Hair for the Homeless” event, in which local shelters bring homeless women to the school for free pampering: facials, hairstyles, hair weaves and manicures.