REVENGE: 30 Men Dead by The Hands of A Young Female Killer

Angel by Teri Woods is a fictional book written about a young, ruthless girl who was obsessed with the drug lord's power and lifestyle.  She was determined to take over the D.C. drug trade, and she would do whatever she had to do to see to it.

Angel was a pretty girl, and her choice of men were those that owned the streets – “Kingpins.”  Her problem wasn't aquiring or keeping a man… her problem was – men.

Being haunted by her past, Angel murdered every man she fell in love with, and robbed them of everything they had including their street credibility and clientelle.

Betrayal, deception and street justice put the entire city on high alert. Angel's wrath didn't end until every person affiliated with bringing her a move paid with their lives. 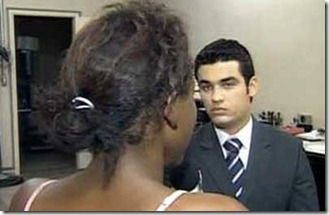 Angel is an excellent read and will keep you glued to the book from the beginning to the end, but the purpose of this post is not to just give you a book review, but to warn you not to confuse fiction with what's really real.

Some people have the misconception that just because it's written up as fictional, it doesn't happen in real life.

TRUE STORY:  According to the Sun, a 17 year old Brazilian girl has come forth and admitted to embarking on a killing spree that has left 30 men dead.  Because of her age, she remains unidentified.

The teen told police, “I don't have enough courage to hold a gun, but I can hold a knife. I am confessing because I promised I would do so before becoming 18, to avoid upsetting my family.” According to the local police, she confessed before she turned 18 to avoid being prosecuted as an adult.

The young woman said that she started her killing spree back in 2006, when she was just 15. After her admission, police began to check her story. So far, 11 of the 30 murders she claimed responsibility for have been corroborated. Other cases are still being checked in the Sao Paolo, Mato Grosso and Minas Gerais states.

Police sources told reporters that the teenager committed all the murders with the same knife, and claimed that they were motivated by, “money, revenge and for bringing justice.” Authorities suspect she may have been hired by criminal organizations to commit some of the murders.