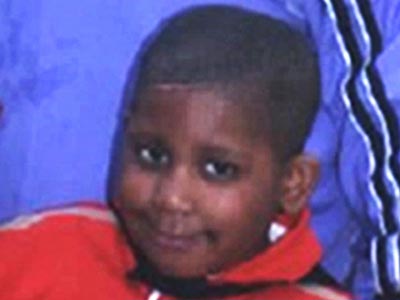 UPDATE: Medical Reports confirm that a body found in a white Chevy Suburban was that of Julian King.

A child's body was found in the vehicle police were looking for in their search for 7-year-old Julian King, the missing nephew of Oscar-winning actress Jennifer Hudson.

The Cook County medical examiner's office has sent investigators to the scene and said the body of a black boy was found inside, an office spokesman said. The child had not been identified.

A Chicago police spokesman released no information about the discovery but are planning a news conference near where the vehicle was found.

Julian was reported missing and an Amber Alert was issued Friday after his grandmother and uncle were found shot to death inside the family's home in the 7000 block of South Yale Avenue.

If the boy is identified as Julian King, it will confirm detectives' worst fears because a law enforcement source said bullet casings were found in the boy's room on Friday.  But, the source said they had not found other evidence of violence in the room.

Chicago police have interviewed William Balfour, 27, the estranged husband of the boy's mother, Julia Hudson.  He was initially described by police as a suspect in the investigation.

Balfour has denied involvement in the killings or the disappearance of the boy, law-enforcement sources said. But at some point, Balfour stopped talking to authorities, sources told the Tribune.

On Sunday morning, Balfour was transferred to a state facility after officials said he violated conditions of parole for a 1999 conviction for attempted murder. On Sunday, Illinois Department of Corrections spokeswoman Januari Smith said Balfour violated his parole because he is a suspect in the slayings and the boy's disappearance.

According to law-enforcement sources, Balfour's alibi the day of the killings has been contradicted by his girlfriend. Police searched Balfour's girlfriend's house for several hours Friday night after taking him into custody. Her home is located about 2.5 miles from where the SUV was found this morning.

Balfour and Julia Hudson had been separated for some time, his family members said. A family friend said Balfour recently had threatened to take Julian away.

A family member of the girlfriend's said police have interviewed her. Police also tracked Balfour's whereabouts Friday through his cell phone, sources said.

Also on Sunday, Jennifer Hudson, who gained stardom after appearing on “American Idol,” and then won an Academy Award for the movie “Dreamgirls,”  offered a $100,000 reward for the return of her nephew.