Model and actress, Runa Lucienne, is currently on a roll. She recently became the new face of Outre's latest “Duvessa” Remy (long lasting) hair collection. And as part of the company's promotional campaign, they're currently holding a photo beauty contest for stylists and models (now through March 31) worth over $135,000 in cash and prizes (see details). 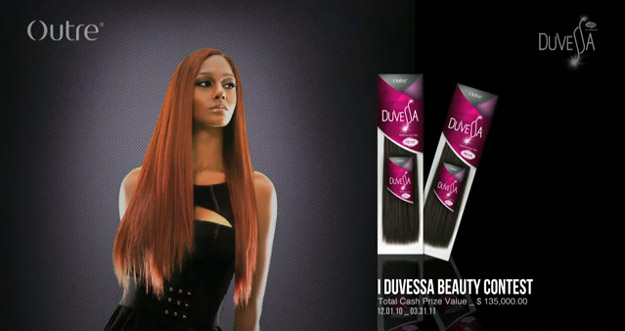 Not to stop there, Lucienne is also recognized as the first African-American Playboy Bunny to work at Playboy Club Macao, located in Macau, China, which opened on Nov. 20, 2010. Apparently that's a big deal considering she was one of the twenty bunnies that were chosen out of thousands who applied for the job.

Lucienne says she is “thankful for the opportunity to work with Playboy, an iconic brands that empowers women,” and “will continue to serve as a positive role model” in her community.

Other accomplishments Lucienne has achieved are working as a model on Project Runway Season 5, and being featured in several magazines including Cosmopolitan, Elle, King, Slam, Source, and Jewel Magazine. She's also featured in numerous music videos including, “We Got Hood Love” by Mary J. Blige featuring Trey Songz, where she plays R&B heartthrob Trey Songz’s love interest. (see video below)