The Obama administration, in collaboration with Vogue Editor-In-Chief, Anna Wintour, and some of the country's top fashion designers, are cooking up something new and exciting in support of Obama 2012. 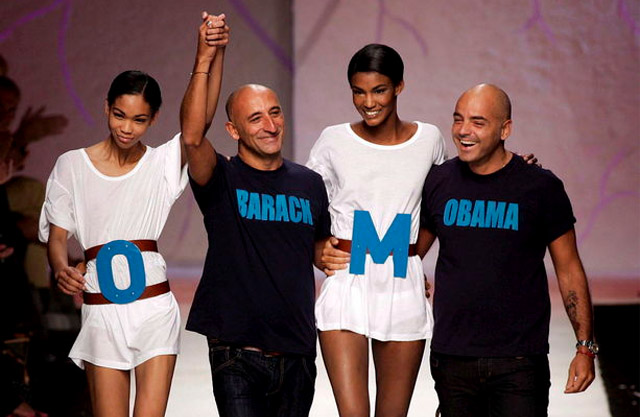 Over the next few weeks, fashion brands will begin to design and unveil merchandise for Barack Obama's re-election. The program, called Runway to Win, is being organized by Vogue's Anna Wintour, and will consist of goods from 22 participating designers including t-shirts, totes, and scarves. According to sources, sales of these items will begin this Thursday (Jan. 12).

Runway to Win is modeled on a similar 2008 program organized by Wintour, called Runway to Change. But four years later, kind of like Obama's disappointed Democratic base at large, apparently not everyone was so very keen to get on board:

“Some fashion executives were wary of publicly siding with Obama's reelection campaign due to the risk of alienating their brands from Republican voters. LVMH Moët Hennessy Louis Vuitton executives initially vetoed brands in their luxury stable from participating in Runway to Win, said sources. However, Marc Jacobs, which is majority owned by LVMH, went ahead with its T-shirt design for the project, following pressure from Vogue,” said sources.