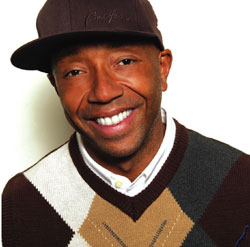 Hip-Hop pioneer and designer Russell Simmons is bringing a little sophistication to the urban over 25 crowd.

“I want to create a line to reach out to those guys who are not young men anymore but who want to still be part of that urban lifestyle,” Simmons said.

Among other pieces in the show were plaid shorts, free-flowing jackets and classic five-pocket pants created in materials like wool and cotton blends.

“Russell is so amazing and such an inspiration,” said actress Gabrielle Union, recently appeared on ABC's “Ugly Betty” and sat near the runway. “I am just honored to be here in his support and to celebrate his birthday.”