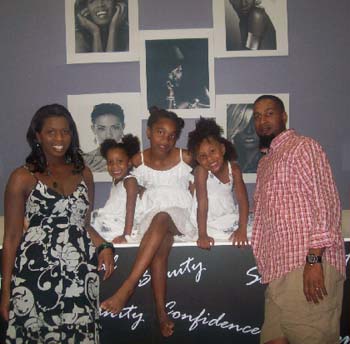 3 Sister’s Beauty Supply deserves some respect for managing to make it happen for themselves (sadly by themselves). They are the only African American-owned beauty supply in Plano, TX.

“We tried reaching out to other black-owned beauty supply stores throughout the country to get tips on the business,” Ricky stated. “We found that they were unwilling to help and offer information.”

The North Dallas Gazette stopped by and visited with the owners, Ricky and Nikki Crawford of 3 Sister’s Beauty Supply three months after the grand opening and found one of the best kept secrets in the Dallas/Fort Worth area.

The North Dallas Gazette reports — upon entering Asian owned stores — the store representatives were rude and unhelpful, but the most offensive findings were the high security plasma screens that graced the walls of the store, in order to keep an eye on the patrons — patrons that are predominantly African American. The other Asian-owned supply store did not have the obvious plasma screens for security, but the woman from behind the counter did step down to follow a few patrons around the store.

Store representatives from both Asian stores were unwilling to make comments to North Dallas Gazette about supply prices to African American suppliers.

According to The North Dallas Gazette, the couple at 3 Sister’s Beauty Supply have their struggles with getting supplies from a mostly Asian distribution base, but they are doing their best to work around the struggles of being African American and supplying their own people with the best quality of supplies that are not only affordable, but good for their hair. They were reluctant to admit that they felt they were getting what Nikki called, “the black price” for the products that they order, but they did admit that getting liquid goods has been a lot easier for them than getting hair. “We’re still having problems getting hair,” Nikki stated. “And we are frustrated with the fact that African Americans are being kept out of an industry that is supported primarily by us [African Americans].”

Nikki says that she has been turned down by the same distributor more times than she can count. She says that the major hair distributor has given her excuses raging from hair shortages to other suppliers being too close to 3 Sister’s location. “I don’t care,” she laughed. “I’m the type that will keep trying and trying until they finally get sick of me. If my customers want a particular brand of hair, I need to get that brand of hair.”

“Our hope is that more African American beauty supply stores will surface in the future and we can band together to build relationships with manufacturers and form our own distribution centers. We would save big as suppliers and then we’d be able to pass those saving right on to our customers,” Ricky explained.

Nikki followed Ricky’s explanation with, “I am willing to share all of the information and knowledge that I have gained so far in the industry to anyone wanting information about owning or opening a black owned beauty supply store.”