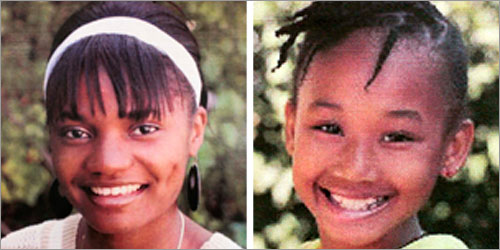 It has to feel like a hot day in hell for a mother to lose her daughters by the hands of her very own son.

A site so gruesome that four Milton police officers were treated for shock and trauma on Saturday after a young man, Kerby Revelus, 23 stabbed one of his sisters to death and decapitated another as officers stormed into his house to save the girl, according to police.

Revelus, was shot and killed by police officers while he stabbed a third sister with a kitchen knife, according to police. Saraphina Revelus, 9, was transported to the hospital following the grisly incident. She is expected to survive.

Police said yesterday that Kerby Revelus had been involved in a fistfight Friday night with a next-door neighbor, a conflict that precipitated the violent knife attack on his three younger sisters in their apartment on Belvoir Street Saturday afternoon.

“We don't know what the fight was about,” Milton Police Chief Richard G. Wells said yesterday. But “this all came as a result of [that] incident.”

According to police, Samantha Revelus, 17, telephoned 911 on Saturday afternoon and told dispatchers she had been wounded by her brother and that she was dying. Police believe that Kerby Revelus then fatally stabbed her with the knife while officers were traveling to the house.

Wells said police arrived at the home and broke down the door to a room on the second floor in time to see Kerby Revelus grab 5-year-old Bianca and slash her neck. Wells said Revelus had already fatally stabbed his 17-year-old sister Samantha “Princesse” Revelus. The officers shot and killed Revelus as he was stabbing Saraphina Revelus and saved her life.Bianca Revelus, who was supposed to start kindergarten this fall, had turned 5 years old the day before the attack.

Friends and family struggled to understand how a brutal slaying that left two sisters stabbed to death, allegedly at the hand of their brother, could have erupted in this quiet neighborhood.

Norfolk County District Attorney William R. Keating said Revelus had been involved in a “domestic issue” in 2004 that involved punching but he did not elaborate. More recently, Keating said, Revelus was charged with a firearms violation that resulted in his incarceration. Keating said he was released several months ago.

Kamara said Revelus would wander up and down Belvoir Street most mornings drinking from a bottle in a brown bag. source and <a target=”_resource window” href=”http://www.thebostonchannel.com/news/19041340/detail.html”>source