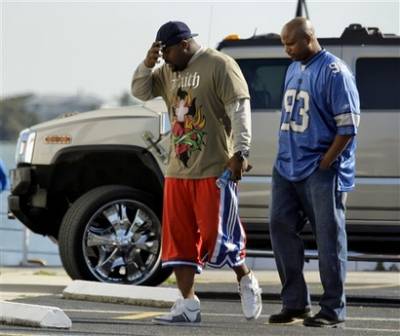 I've been following this story in hopes that these guys would be found safe, but as it seems they may very well be long gone.  I can't even begin to imagine what they were going through during the time they were holding on for life and possible rescue, and I also can't even imagine how awful it would be if they are in fact still alive.  If only the search team could have found them SUNDAY… My heart goes out to them and their families.

The Coast Guard called off the search Tuesday for two NFL players and a third man lost at sea off the Florida coast after their boat capsized during a fishing trip.

“We're extremely confident that if there are any survivors on the surface of the water that we would have found them,” said Coast Guard Capt. Timothy Close, who added that searchers scoured the equivalent of 24,000 square miles over more than 60 hours.

Hopes were raised Monday when crews found a fourth man who was aboard, 24-year-old former South Florida player Nick Schuyler, who managed to stay with the boat after it overturned Saturday evening.

William Bleakley's father said he felt comfortable with the Coast Guard's decision and that his expectations lowered after only one survivor was found.

“I think they did everything that they could,” Robert Bleakley said of the Coast Guard. “I think they were not to be found.”

Close said searchers found a cooler and a life jacket 16 miles southeast of the boat, but no other signs of the men.

Prospects for survival became more grim throughout the day, with Cooper's father saying the Coast Guard told him privately officials were losing hope because so much time had passed and hypothermia risks were high. Coast Guard officials said publicly that they were still hopeful.

“I think the families understood that we put in a tremendous effort,” Close said. “Any search and rescue case we have to stop is disappointing.”