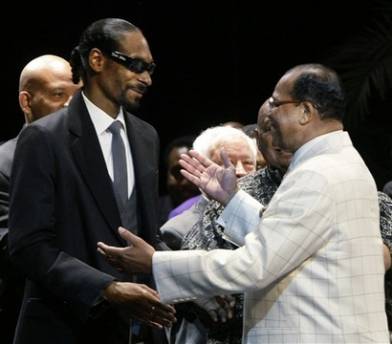 It never dawned on me that Snoop Dogg would be a part of the Nation of Islam, but being that he has ties with a die hard such as J.T. The Bigga Figga, I really should have known.

Rapper Snoop Dogg made an appearance Sunday at the Nation of Islam's annual Saviours Day convention, praising Minister Louis Farrakhan and revealing that he is a member of the movement.

Snoop, whose real name is Calvin Broadus, gave a $1,000 donation to the Nation and said he will always seek the minister out.

The rapper called himself the “leader of the hip-hop community” and said it was his first Saviours Day event. He told followers that he would share the information he gathered with other musicians.

“When you get a speech from Minister Farrakhan it's about a mirror, it's about looking at yourself,” the rapper later told The Associated Press. “It's about seeing yourself and what you can do to better the situation … We're doing a lot of wrongs among ourselves that need correcting.”

When asked by the AP if he planned to convert and become a member of the Chicago-based Nation of Islam, Snoop said he already is.

“I'm already in the Nation, that's why I'm here,” he said. “I'm an advocate for peace. I've been in the peace movement ever since I've been making music. My whole thing is not about really trying to push my thing on you. It's just about the way I live, and I live how I'm supposed to live as far as doing what's right and representing what's right. That's why I was here today.”

The rapper did not elaborate on when he'd joined the Nation. Messages left for Nation of Islam officials were not immediately returned Sunday.

During the speech Sunday, Snoop sat on stage behind Farrakhan clapping and nodding.

Snoop declined to say how long he would be in the Chicago area or whether he was working on any projects. His last album, “Ego Trippin,'” was released in March 2008.

Farrakhan has long held relationships with famous rappers and hip-hop artists. He has hosted and spoken at hip-hop conventions, encouraging peace between rappers.