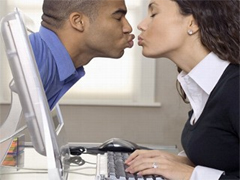 The answer to the question is undoubtedly, yes, and according to recent studies, the number of people looking for love online has not decreased over the years. In fact, the numbers have drastically increased, because of the many options people have for choosing their mates, in terms of appearance and other preferences.

For example, a new University of California-Berkeley study suggests that the majority of online daters prefer white partners.

As funny as that may sound, it's supposedly true. Out of 1 million online daters, the study suggests that cyberspace is segregated by race. The study found, when it comes to dating online, whites prefer whites, and blacks, well, also prefer whites. More than 80 percent of whites – even the 48 percent of males and 28 percent of females who said they were indifferent to race – sent messages to whites, and just 3 percent contacted blacks.

So, just where are these people looking? Researchers of this study won't disclose that information, but we do, however, have other sources that claims to be experts in the online dating scene.

Rico, better known as Your Royal Flyness, would probably consider himself a credible source. He shares three major online meeting places: Myspace, Facebook, and Twitter. He also claims to have dated over 500 women online. To add to his resume, before online dating, he says he used the “Party Line,” which was a telephone service, where millions of people connected with each other with personal pin numbers to find potential dates.

Now, “Flyness” teaches both men and women the do’s and dont’s of online dating, through his many publications, which include: “From Myspace to My Place,” “The Facebook Datebook for Men,”and his latest, “Tweet Her and Meet Her.”

Whether or not, “Flyness” covers racial segregation within the dating scene is unknown, but I guess if you're in the market of looking for a partner “online,” he may have a few pointers for you. He does mention somewhere, ghetto chicks are available, and believe it or not, there are many guys out there that want them.