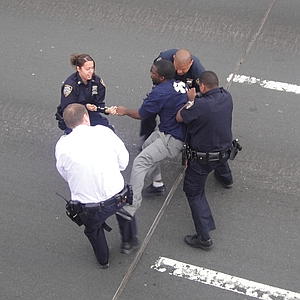 Four cops and a Taser gun couldn't take down a deranged civil servant who was hellbent on jumping from the Brooklyn Bridge yesterday.

The man fled the scene, and about an hour later, a flurry of 911 callers said the emotionally disturbed man was walking in traffic on the bridge.

After unsuccessful restraints by police, and escape from a defective taser gun, the man climbed onto the exterior of the bridge, where he stripped naked and jumped 122 feet to his presumed death.