It was a dream come true for Veneisha Robinson who says she paid $5 for a LeBron James 23 pendant thinking it was just a piece of costume jewelry. Robinson claims she purchased the pendant at a garage sale in Akron, OH 4 years ago, but learned just a couple days ago the jewel was worth just about $10k.

As it turns out, the one-of-a-kind pendant is said to be stolen, and *wait* the story gets much more interesting.
According to NewsChannel5 Robinson received a phone call on Wednesday from Katherine L. Powers, the mother of Maverick O. Carter. Carter is the CEO of LeBron James’ marketing company, LRMR.

Robinson claims Powers tricked her into coming to Carter’s house by making her believe LeBron would be there to buy the pendant back. 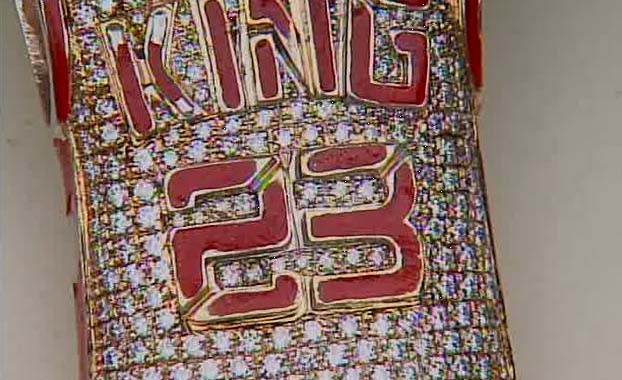 “When I got there, LeBron James was not there. It was about eight or nine other people there,” Robinson said. “They pretty much accused me, they threatened me and they used their authority to they (sic) best ability to get the pendant in their possession.”Robinson said she and her mother drove to Carter’s house in the 500 block of Caledonia Drive in her mother’s pickup truck. At some point Robinson noticed that they were blocked in.

“They blocked her truck in the driveway. They told us that we weren’t going anywhere until they got that pendant. I was scared for my life,” she said.

Wadsworth police said they were called around 11:30 p.m. Wednesday night by a woman visiting a neighbor of Powers. According to a recording of the 911 call, the woman heard loud arguing. She said she called the police at Powers’ request.

Robinson showed up at the station on Thursday afternoon where they apparently confiscated the pendant. She was also advised to get a lawyer.

Police are currently trying to determine if the pendant was ever reported stolen, but Robinson maintains she could not have had the jewelry certified by the I.G.S. if it were stolen property.

“There was no serial number on that pendant so it’s untraceable,” Robinson said. “That pendant is mine. It belongs to me. I want it back.”

WOW… that’s pretty fcuked up… She probably should have just kept her jewel a secret instead of going to the news with it in the first place?

UPDATE: According to Curtis Jackson on WEWS-TV ABC, the pendant was not confiscated by police, the pendant is in the possession of Maverick Carter and his mother. As to how it got from Vaneisha’s hands to their hands is not yet clear.