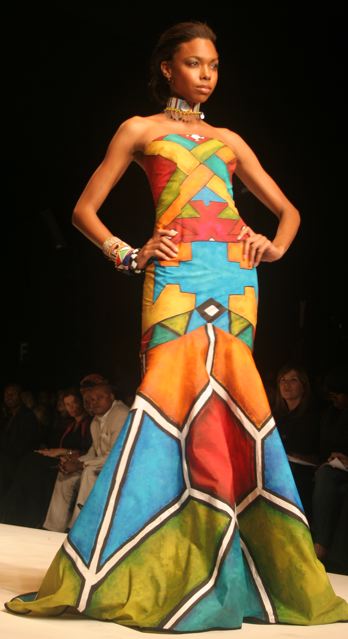 As you can see to the right, Kimora Lee Simmons kept everything on point at the Superhero Costume Institute Gala with an elegant dress from the Spring 2008 Africa-A Safari collection by Kevan Hall. The line is a trek through some of the most stunning parts of Africa and is steeped in the beautiful people and culture.

The colors and material were influenced from individualistic tribes like the Dinka, Maasai and Zulu to the animals themselves such as antelopes and zebras.

The fabrics are designed by artisans in Africa and you see it in pret-a-porter style tattoo matelasse safari jackets, tailored vests and embroidered dashikis, as well as in Kalahari printed silk chiffon gowns.

The famous Maasai tribes of the Serengeti plains set the tone for next season of colors. If Hall has his way, we will see the trademark deep reds the tribe in magazines and red carpets. However, the tribe never will see the magazine shots they inspired – they don’t even let themselves be photographed as they believe the camera steals part of their soul. For the tourists in Kenya, they rotate which members are photographed to earn a little cash for the tribe, so too much of a soul is never stolen. 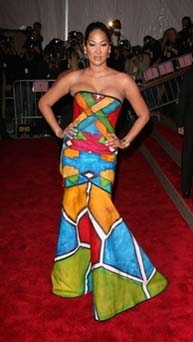 One aspect of the tribal trend is use of dye and color. Hit and miss methods of dye application, such as tie and dye, or more controlled bleed dye Ombre techniques emphasize the primitive tribal feel to the garments. Tie dyeing and bleed dyeing is a fashion trend that simply won’t die. But this year it does look a bit more sophisticated and there is obvious technical control in the Ombre dyed garments.

The dress to the right below is from the Oscar de la Rente Spring/Summer 2008 collection. The dress sums up a typical African style pattern and the coloration is everything one might expect in this very fashionable look. It has the raw earthy tones found in the palette of a Renaissance artist. The colors really could be obtained from materials in nature. 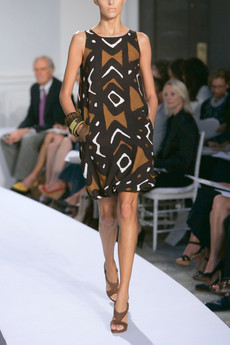 Tribal patterns are statement making prints that feature primitive art motifs, or the imagery of objects found in nature. This might be the enlarged skeleton silhouette form of a leaf, a simple bone outline or tooth, or the pattern of an animal skin.

The color is most often typical of simple natural dyes found in plant greenery, lichen and berries, bark and nuts, or sea products such as shells or fluid sacs. 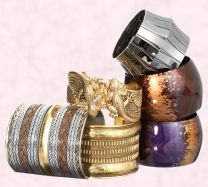 Golden brown onion skins for example produce a wonderful mustard yellow tone and natural tones such as these are often the most used colors along with black for dramatic positive/negative contrast.

Adding bead, wooden, raffia or woven effect trinkets or bags helps create textural contrast which is so important to the tribal fashion trend. You can go tribal in your wardrobe this summer 2008 just by accessorizing. You may already have an animal skin item or accessory so see how you can work that item into your fashion look.

High fashion costume jewelry necklaces, bangles and cuffs could all add a tribal finish to your summer 2008 look. Most importantly if you are unsure about this fashion trend then this would be at a very low cost.