The states are swapping data files to find duplicate names, but civil rights attorneys say they are not following federal law to remove them.

Election officials in a handful of states appear to be ignoring the federal law dictating the way registered voters may be purged from voter rolls, civil rights attorneys say.National voting rights groups have contacted officials in Kansas, Michigan and Louisiana in recent weeks because those states appear to be purging registered voters after election officials found duplicate names and birthdays of people on their voter lists and in out-of-state databases, such as driver’s license records. 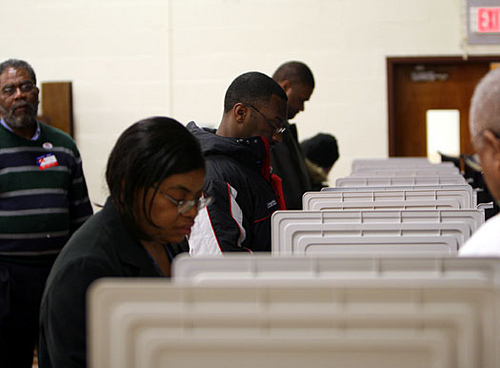 The states are assuming that a more recent driver’s license or voter registration in another state indicates that the voter has relocated, meaning the voter registration tied to their prior address is no longer valid. While purging voters who move, die or are imprisoned is a routine part of managing elections, the federal law governing purges — the National Voter Registration Act — lays out a multiyear process of trying to contact voters to confirm a change of address before deleting them from voter rolls.

The election attorneys say the NVRA process seeks to err on the side of protecting voting rights and cannot be circumvented by what appears to be a duplicate voter registration.

“The National Voter Registration Act (NVRA) limits the circumstances in which a state may cancel a voter’s registration,” the Fair Elections Legal Network, a Washington-based voting rights consortium, said in a June 24 letter to Kansas Secretary of State Ron Thornburgh. “The NVRA does not permit cancellation based on a match alone.”

“We are looking at several statewide purge issues,” said Bradley Heard, a senior attorney with Advancement Project, a voting rights law firm. He said that in Michigan, both data matching and mailings by local officials to verify a voter’s registration information were of concern. “We are also looking at a state law that calls for purging a bunch of voter registration records that are otherwise eligible.”