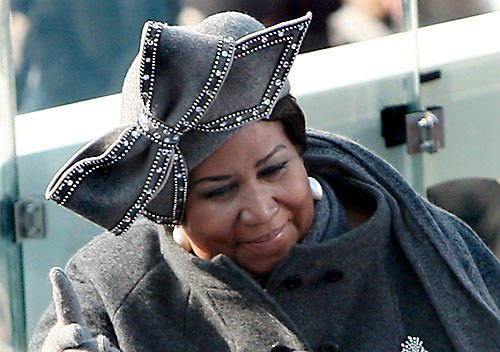 The Queen of Soul’s big-bowed headgear has become a hot property since the legendary singer wore it to belt out “America the Beautiful” at President Barack Obama’s Jan. 20 inauguration.

The designer, Luke Song, said he has received more than 3,000 requests for the hat. He plans to sell a replica for $179.  The original custom made hat was well over $500.

Video spoofs of the hat are on YouTube. It has a MySpace page. And the Internet is full of altered photos of the hat perched upon the heads of the famous and non-famous alike, from George Washington to Dick Cheney to Miss Piggy.

While the Smithsonian wants the original, Aretha’s not sure if she wants to give it up.

“I am considering it. It would be hard to part with my chapeau since it was such a crowning moment in history. I would like to smile every time I look back at it and remember what a great moment it was in American and African-American history. Ten cheers for President Obama,” she said in a statement, according to New York Magazine.

One piece of couture that will definitely be heading for the museum is First Lady Michelle Obama’s ball gown from the historic evening.

According to the Washington Post, the Jason Wu-designed dress will be on display this summer, and they’re interested in her Isabel Toledo ensemble from the ceremony, as well.

The Smithsonian’s collection currently includes 21 dresses from past First Ladies.