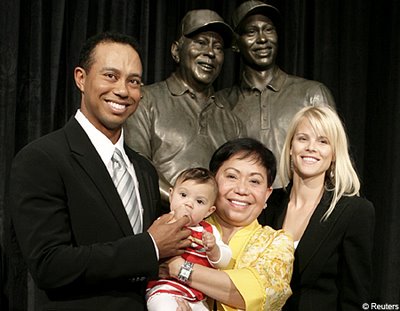 Golpher Tiger Woods' minor car accident during the Thanksgiving holiday has been blown so far out of proportion that it has now resulted in playing the race game, and of course the black community is said to be the blame.

Despite Woods declining to identify himself as black, and famously chose the term ''Cablinasian'' (Caucasian, black, Indian and Asian) to describe the racial mixture he inherited from his African-American father and Thai mother, some blacks insist he is a black man and many disapprove of his marriage to Elin Nordegren, a white woman.

As the story goes, black women have long felt slighted by the tendency of famous black men to pair with white women, and many have a list of current transgressors at the ready.

''We've discussed this for years among black women,'' said Denene Millner, author of several books on black relationships. ''Why is it when they get to this level … they tend to go directly for the nearest blonde?''