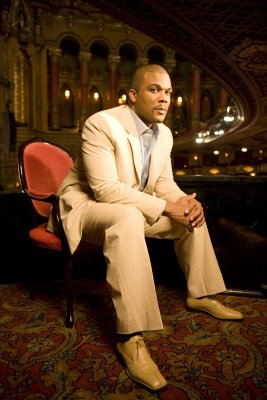 CNN reports that Tyler Perry wants to take his character Madea to Europe, but he's been told that audiences there won't relate to his stories about African-American lives.

The challenge to conquer Europe has “sat in my spirit,” Perry wrote in a newsletter to his fans.

Perry, who just a few years ago was homeless and broke, has made a fortune proving naysayers and critics wrong with a successful string of low-budget movies based on his Christian-themed stage plays.

“I was once told by someone that my movies only appeal to black people and no one else,” Perry wrote. “Now, I know that's not true.”

When his first movie — “Diary of a Mad Black Woman” — debuted in 2005, people who had seen his stage plays in person or on DVD flocked to theaters, making it the week's top movie with almost $22 million in ticket sales.

“They think I don't know what I am doing,” he said in a CNN interview. “They think that this is all haphazard, that I am some sort of idiot or something.”

Perry said he does not write to please the critics, but for a broad audience of all ages.

With six films already out and a seventh — “Madea Goes To Jail” — coming soon, Perry has never made a box office flop. His movies average nearly $22 million on opening weekends and almost $47 million in total domestic sales.

Perry, in his message to fans, said he sees his stories as universal.

“I know that even though I write from an African-American experience and most of the time I have an all-African-American cast, that doesn't mean that other people from other walks of life can't relate,” he said. “I think that any human being who goes through what we all go through can relate to my films.”

“I know and remember that when I'm writing,” he continued. “But when this person said that to me, they also said Europeans would never relate, and that sat in my spirit.”

Perry said he flew to Europe in January — “to find out for myself” — with visits to Rome, Madrid and London. It was there that he wrote his letter to his American fans.

“So far, all of us seem to be pretty much the same,” he said. “We love to laugh, we all have problems, we all want love, and we all have a church in every country. And since these are the things I usually write about, I don't see how that statement can be true. Do you?”

Perry could get his answer soon.

Lionsgate has not said if “Madea Goes To Jail,” which debuts Friday, will be marketed to European audiences. But the company signed a joint venture deal last year with Eros International, an Indian film company, to distribute its films in India — the second largest English-speaking market in the world.

If that arrangement does not take Madea around the world, then perhaps Perry will try it on his own, Franklin said.

“He has the money to back up his intentions,” he said. “He proved his naysayers wrong in America, with his will and perseverance. There's no reason he can't do the same overseas.”