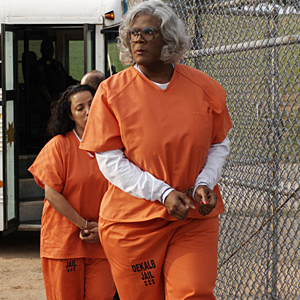 Once again, Tyler Perry tops the Box Office.  Maybe it's about time he starts getting the respect he deserves across the country (including Europe!)

The new comedy shot to No. 1 at the box office, with estimated ticket sales of $41.1 million, according to film tracker Media by Numbers.

With the economy in dire straits, “The mood of the country is one of looking for escapism,” Dergarabedian said.

Actor-director-producer Perry, who plays the feisty matriarch Madea, is building a strong franchise with the character. The box-office take for his new film was nearly double what his first Madea feature, “Diary of a Mad Black Woman,” brought in on its opening weekend four years ago.

• Who saw Madea Goes to Jail? A younger, more diverse crowd than Perry typically draws. Per Rothenberg, 35 percent of ticketbuyers were under 25, up from 18 percent for his last movie, The Family That Preys; 13 percent were Hispanic, up from 5 percent. The core audience remained African-American women.

• For Cosby Show completists, it should be noted Madea Goes to Jail goes down in the books as the highest-grossing Keshia Knight Pulliam movie ever.