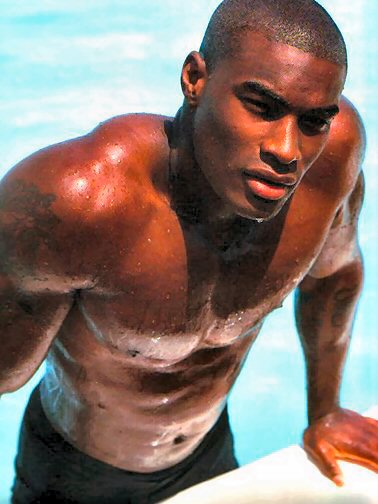 He claims his reasons are because it takes away from the real models that need jobs too.  I can agree with that being the #1 reason, but truth be told, let me tell it, the #2 reason is he's just plain sick of seeing the same old celebrities plastered on everything and everywhere he turns his head (including blogs).  I never could and still can't understand why magazine covers deserve a whole topic of discussion on a blog for no apparent reason other than the fact that “Beyonce” or the like graced it.

Tyson has crossed over from modeling to acting, but Tyson Beckford says he wishes celebrities wouldn't jump into the business that made him famous. (just annoyed)

Beckford, host of Bravo's “Make Me a Supermodel,” says that “when celebs do product ads or grace the cover of fashion magazines, they take jobs away from models.”

The 38-year-old says it takes “a lot of tweaking and airbrushing to get the same from a celebrity that you would get from a model.”

He also says fashion is cyclical, and he believes celeb magazine covers will one day go out of style.

Meanwhile, as I'm sure you're aware, Beyonce graces the cover of Vogue's April issue, and Drew Barrymore is on the cover of “W” magazine…. and?…. I mean I can appreciate showing love, but enough already of a buncha nothing and (as Keyshia Cole's mama Frankie would say: Imma need yall to get it together.)

Apparently, he's not the only one irritated by this trend that magazine publishers have adopted as a means of drawing attention to the public and increasing sales.  popcultmag.com says it best:

“Take a look at your local newsstand and here's what you'll see: racks upon racks of magazines that look almost identical. Whether they focus on music, fashion, cigars, fitness, women, or men, most magazines typically feature a grinning celebrity on the cover peeking out from behind squadrons of coverlines. It wasn't always like this.”

“Today, the art of the magazine cover has been vanquished by celebrity worship and bad taste. Designers are simply fulfilling the dictates of their industry, not unlike the paint person on an auto assembly line. Innovation, creative expression, or even cleverness has been mostly abandoned. Artistic considerations are limited to how much retouching the celebrity headshot requires in Photoshop and how many headlines can be crammed in before the cover looks too “busy.” The result: A world in which it's difficult to tell the difference between Playboy and Harper's Bazaar without cracking them open.”