Virgin Zulu Dancers Forced To Cover Up Their Private Parts 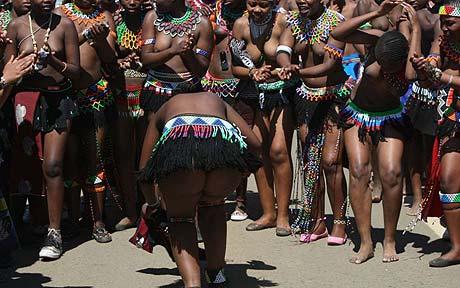 Young virgins have been performing the Zulu Royal Reed Dance for centuries wearing nothing but beads and short fringed skirts.

But now King Goodwill Zwelithini has told the girls to put on sarongs or traditional undergarments called umuntsha to cover their buttocks.

He said the event was “not for looking at maidens' bottoms.”

And the King added: “There are times when maidens have to sing and dance and we end up seeing certain private body parts that we're not supposed to see.”

Locals are said to be fed up of “lascivious” male tourists who “act like paparazzi” and “zoom in on bare flesh with their hi-tech cameras.”

Zulus say their traditional ceremony is being sullied because of the wrong sort of attention from visitors.

Photography at the traditional dances, performed by thousands of virgin girls in Nongoma, northern KwaZulu-Natal, South Africa, is strictly regulated.

All camera-men are supposed to be bona fide members of the press. But checks in recent years have shown some photographers were just ordinary tourists taking pictures without approval.

The tradition is carried out to pay homage to the King, who chooses his wives from among the dancers.

The dancers usually do not wear underwear because the routine is designed to be a proud display of their innocence.

Zulu girls are said to be angry at being told to cover up because they are losing the chance to show off their virginity in the customary way.

However the ANC Women's League argued other girls were deterred from performing because of the semi-nudity and now would feel more comfortable.

The ceremony clocks up more than 25,000 visitors per year.