WARNING: Rule #1 is Never Mess With A Man and His Food 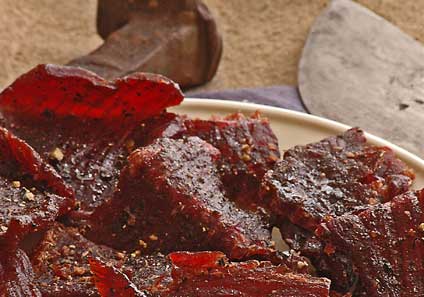 They say a way to a man's heart is through his belly.

A man truly loves a woman who can cook, and I'm almost certain it was a man who came up with the saying: “taste so good it makes you wanna slap your mama.”

Most men enjoy their food so much they don't even like you to look at them while they eat – and sadly, some men will even kill you over their food.

In this case, the food wasn't so great.  In fact, it was so bad that police said a Cleveland barber became so upset by what he considered bad beef jerky that he returned to the store where he bought it and tried to rob the owner.

Police said the 28-year-old barber walked into the store where he bought the snack, just two doors down from his barbershop, and tried to rob the owner Thursday night.

The owner told the man he recognized him and chased him outside with a baseball bat.

Police arrested the man at his girlfriend's house a few miles away.

The barber told police the stick of beef jerky he bought sickened him and his dog.